The other day I tweeted this: 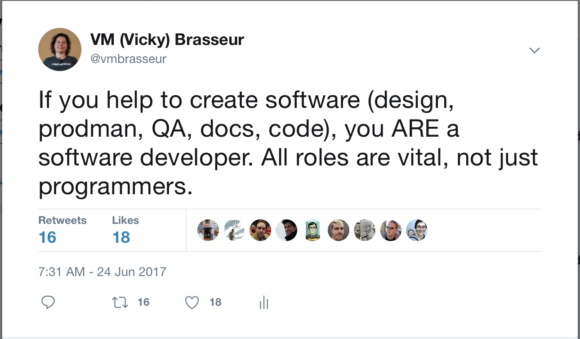 This tweet is a necessarily brief exclamation of something which has been on my mind a lot lately and warrants a larger post. In summary: The words we use matter.

It’s probably safe to assume that nearly everyone reading this is involved with creating software. Even if you’re not, you’re undoubtedly aware that software development is a complex process composed of many moving parts. While it’s possible to create software on your own, it usually works much better when we collaborate to build each of the parts.

Despite recent “full stack” trends, none of us can be specialists in every facet of the software development and creation process (nor should we try). Many different skills are required for the process to work smoothly:

This is the software development process. This is what it requires. A true “full stack” software developer would be skilled in all of these roles (which is why the very concept of “full stack” is laughable). Yet lately when we speak of software developer we mean only those who create the code. As we see above, programming is only a portion of the process, just one of those many moving parts. The term as currently used disregards the myriad other roles required to develop a successful piece of software.

It’s unclear what nudged our language to shift such that “software developer” has come to exclude the majority of roles responsible for successful software development. It’s not as though there is any shame in the title of “programmer.” It’s a descriptive title but more importantly it’s one with decades of rich history behind it. By using “software developer” instead we’re not only excluding people, we’re turning our back on this history and everything which it affords us.

Why is this important?

Words matter. How you talk about things affects how you think about them. To discuss “software development” as though it were a purely programmatic act excludes a large percentage of the people who participate in the process and encourages a “cult of the coder” mentality such that programmers are lifted up to near aristocratic levels.

This programming-centric view does software development no favours. By excluding other roles from the language we use, we also exclude them from how we think about the process. The piles of startup corpses strewn along the road to business success are a testiment to how ignoring things like user needs, market fit, and usability will scuttle even the best coded piece of software. Recent findings by GitHub show that excluding documentation from the process has negative effects on the adoption of and contributions to free and open source software projects, no matter how well architected their APIs.

The biggest loser in this “cult of the coder,” though, is the end user. The poor unfortunate souls who struggle to use a UI created by someone inexperienced in the skill, who growl in frustration as yet again a software service updates without a much requested feature, who are astounded by Internet of Things products with no concept of security, who puzzle out and reverse engineer undocumented installation steps. So much productivity, opportunity, and customer good will lost because software companies often focus more on programming than on the entire software development process.

Don’t get me wrong: I love programmers. I’ve spent most of the last ten years of my life leading programming teams and departments. Programming is a highly specialised and ever changing part of the industry. It’s populated by some of the most clever, most inspiring, and kindest people with whom I have ever had the honour to work. It is not the fault of programmers that the language shifted around them. It is the fault of our industry, our community, and our culture.

We can do better. We can do better for the end user, for programmers, and for everyone involved with or impacted by software development. It all starts with changing our perceptions through language.

Let’s start to shift the language back and reclaim the term “developer” for all who participate in this complex process rather than just the programmers. Let’s evolve the mindset back toward one where we recognise the contributions of all of the roles which contribute to delivering and supporting a successful software project. Let’s call a programmer a programmer and just get back to work creating software which changes peoples’ lives in valuable ways.