Last night I was speaking with a junior engineer who’s entering the job market. She’s had no trouble getting development internships (she has four of them under her belt right now) but has been having a hard time finding ways to learn about the area which most appeals to her: Ops and Infrastructure. That led me to post the following tweet: 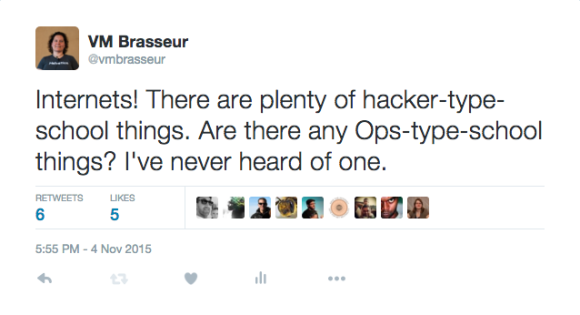 The hope was that this would turn up some online resources where a person could start to learn the arcane mysteries of ops and devops, but it didn’t really work out as well as I was hoping. While people did provide some resources (more on that below), overall it appears there aren’t nearly as many structured learning opportunities for ops as there are for programming.

And that got me wondering… just how are people learning this stuff? Ops and infrastructure is a tricky and complicated topic. It’s the foundation on which the entire internet is built. Thousands of people around the world spend their days setting up, scaling, monitoring, and maintaining infrastructures large and small. But how did they learn how to do that?

I acquired my own far-from-comprehensive ops knowledge in an ad hoc manner: Something would break, I’d virtually or actually tag along as it was fixed by someone more knowledgable. That was a perfectly cromulent way to pick up some basic knowledge, but doesn’t exactly scale to professional levels. And it certainly wasn’t actionable advice to give to a young engineer. What to do?

Well, crowdsource it, of course.

I’ve created a new repository in Github: devops-learning-resources. It currently contains all of the resources which people shared in reply to my tweet along with a few others which came to mind. Do you know of additional resources? Pull requests gratefully accepted!

Let’s do this thing, people. Let’s make it easier for aspiring ops people to find the resources they need to support our infrastructure for years to come.

Oh, and if anyone is interested in hiring an ambitious and eager junior devops person, let me know and I’ll put you in touch with her.